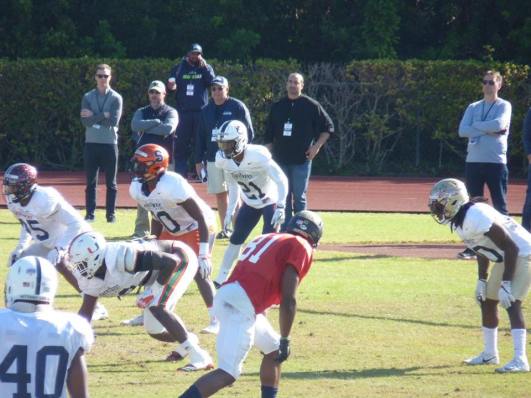 This was the third practice for the East team, the level of intensity went up over the past two practices and players are getting the calls and situations fully down. It will be an exciting game this Saturday.

In addition, I thought the touchdown pass to Daurice Fountain was beautiful, as the Northern Iowa wide receiver had to lay out for it, plus keeping two feet in bounds. Overall, just an incredible play by a guy that has now recorded three solid practices in a row.

Individual performances that I praise on the defensive side includes Chad Thomas, Chris Worley, and multiple cornerbacks, plus on the offensive side, DaeSean Hamilton, J.T. Barrett, and Brian Allen shined.

First off, Chad Thomas can just flat out move for a guy his size. He is in a group of pass rushers that does not have a big name, but he is making his name standout. Thomas rips and swim with force and bending around the corner, as he has blown past the tackles. He did show nice run stopping ability today. Thomas will be a better pro than in college from a production standpoint.

Secondly, Chris Worley will be a NFL player for many years to come. This kid will be a steal in the draft and he is showing the scouts this week that he can be a three-down linebacker. Smart and athletic player that shows versatility in his collegiate career by lining up as an outside linebacker. Solid practice as my eyes were on him all day long. 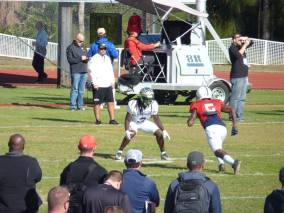 Next, Brian Allen is a center from Michigan State. This experienced trench fighter has been excellent at opening holes and pass protecting the quarterback this week. He is hard to move and I still have not seen anyone move him. He is a bulldozer at his position. 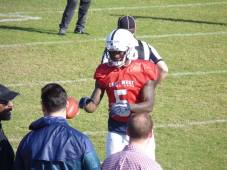 However, DaeSean Hamilton lived up to the notes I recorded on him, as today he did not drop many passes (maybe one), he ran excellent routes and especially the deep ones, I see his great run blocking skills displayed, and when he lines up in the slot he is a nightmare. Reminds me of a poor mans Chris Godwin (former teammate).

Finally, other than Barrett’s interception, he had a solid practice. His leadership showed in many game-like situations and he did throw some nice footballs around the gridiron. The offense work rate goes up when Barrett steps in and I notice that.

Overall, the East team will look to end the West team’s win streak over them.